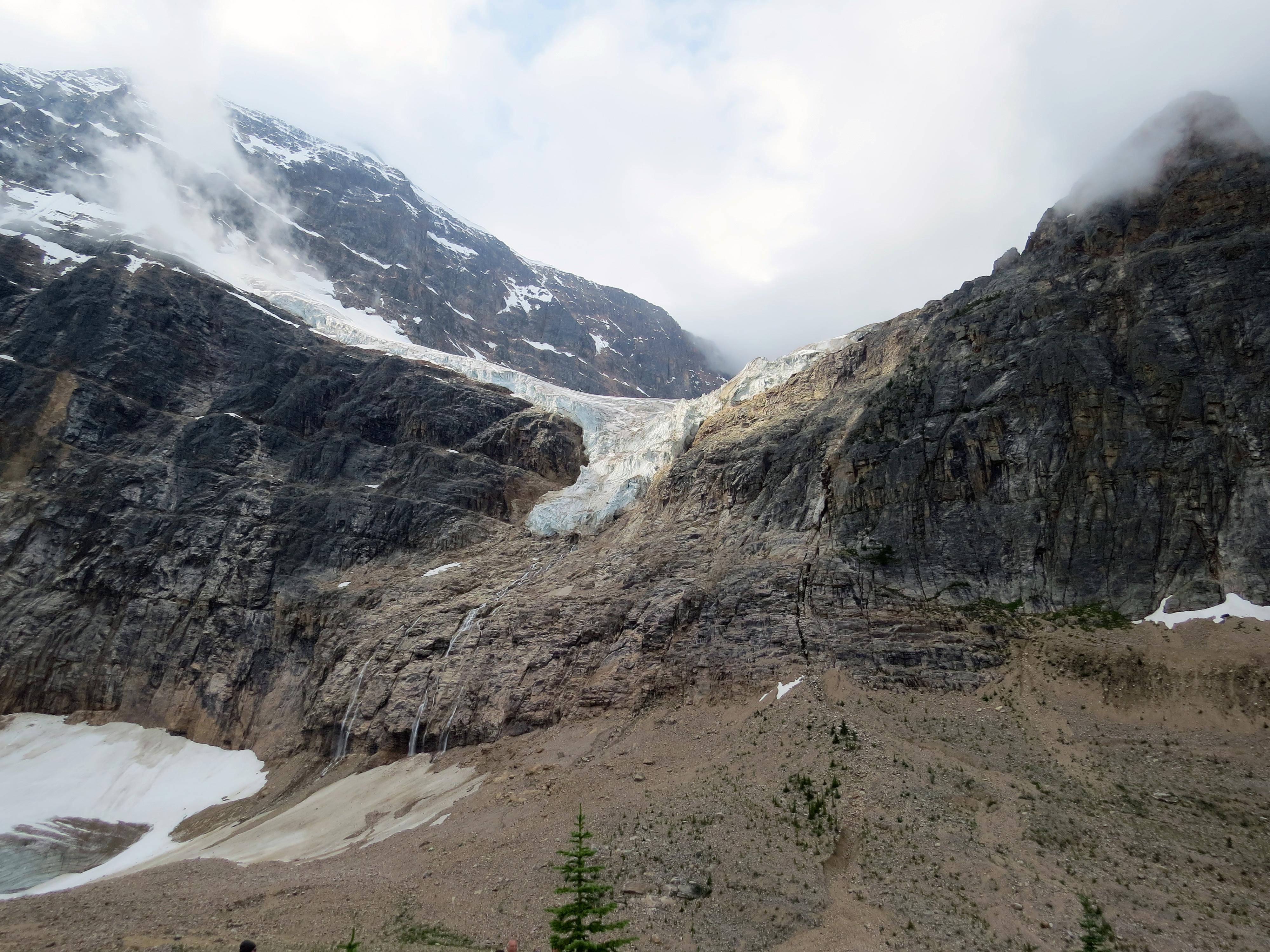 Following an eventful 3 days of travel (through active wildfire territory) and settling in to our campsite home for 10 nights (including sleeping in the car for a portion of one night due to our extreme lack of preparation for the cold that Jasper sees at night in the summer), we finally painted!

Up cold and early we lined up in front of the tourist information centre that morning to get tickets to visit Mt. Edith Cavell later in the week. There is construction happening there so officials are timing and limiting the amount of people allowed up at one time. While it was a teeny bit of a pain to get the tickets, they did well in setting limits because the flow of people was not too much, not too little. More to come about that in subsequent postings…

In the meantime, our first painting stop was to be Athabasca Falls. However, our slight delay meant the number of tourists that morning was high and we couldn’t find an out-of-the-way spot to paint so we just took a few reference photos for later painting. Instead, we headed back on the road and stopped at the side of the highway to paint the Athabasca itself instead. Note: The BC wildfire smoke had followed us into Jasper, so visibility of the surroundings was limited. It therefore made sense to a paint close view rather than distant. We had a successful couple hour session, during which we met and chatted with a nice young fellow who was working the river boats this summer. This is one of the asides of painting en plein air – you meet some characters!

We both had a successful and enjoyable first painting session and were excited for more so we headed to the river again beside Becker’s cabins. I was distracted by the highway, stopping tourists and fear of bears so my results were not worth keeping. Andrew had better luck. The thing about bears in that location is that the previous time we visited Jasper we had dinner at Becker’s and the highlight of the night was watching a bear traverse the hillside across from where we were now painting. Bears – they are very real.

The next day was when we found a painting location which we returned to whenever we were undecided about where to paint. This meadow at Jasper Park Lodge became our go-to spot even just for chilling a bit with stunning views of multiple mountain peaks and the Athabasca.

One 3 hour painting session at this meadow was where I put into practice a tip from Richard Schmid’s book, Alla Prima. The tip is to paint what’s most important first. And it seems to work for me! Particularly because I tend to become less focused as a session goes on, getting what I want to say down first means that the painting is more likely to be successful even if it is just a sketch of what I found most important about the scene.

While we were so close to the Jasper Park Lodge that day we decided to check out Mountain Galleries. And it was there, in such a beautiful lodge, in the midst of several stunning pieces of art, that we spied a painting by Josh Clare which moved us both, very much. (Truth be told, Andrew pointed it out and it took a second viewing on another day for it to hit me – that rare art experience feeling). The painting captured the light focused on a red earth mountain peak. Unfortunately I can’t find an image of it online. Andrew and I pondered the purchase of this painting for a couple days and… I’ll tell you more about that in my next post. Oh yes, there are plenty more painting adventures to revisit!